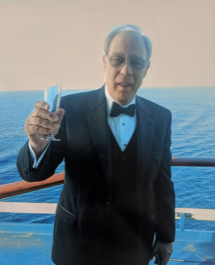 Please share a memory of Ernie to include in a keepsake book for family and friends.
View Tribute Book

Ernest Robert Binstock passed away unexpectedly on April 14th, 2019, in Paris, France, he was 76 years old. Born in Chicago in 1942, Ernie was a U. S. Army veteran. He met Geri in 1963 and they married in 1965. He earned his Bachelor of Arts from Roosevelt University and attended graduate school at DePau. Ernie was a past president of Congregation Eilat in Mission Viejo. He was a human resources professional serving in his most recent post as Human Resources Director of The ActOne Group for the last eleven years.
Beloved husband to Geraldine; Father to Stacie (Mark) Habegger, and Abbie (Stephen) Moore; and Papa to Jack Habegger and Moxie Moore.
Ernie was preceded in death by his parents, David and Ruth Binstock, and he is survived by his siblings Larry (Helaine) Binstock and Adrienne (Budd) Levin. He is also survived by his brother- in-law, Larry (Nongkran) Daks and many nieces, nephews and cousins. His cherished in-laws, Maxwell and Henrietta Daks also preceded his passing.
Ernie was an athlete and sports fan who played football, basketball and golf. He followed professional and college sports and enjoyed rooting for his hometown Chicago Bears. Ernie was charismatic, funny and intelligent. He radiated a warm presence that drew people into his orbit. His co-workers became friends and his friends became family.

Share Your Memory of
Ernie
Upload Your Memory View All Memories
Be the first to upload a memory!
Share A Memory