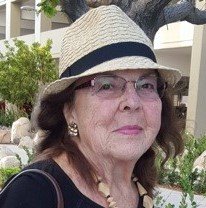 Please share a memory of Gloria to include in a keepsake book for family and friends.
View Tribute Book

Gloria Boyarsky passed away peacefully on Monday, December 4, 2017, at home in Orange, CA, at the age of 88 surrounded by family.  Born in Brooklyn, NY to parents Max and Ruth Miller on November 11, 1929, she moved to the village of Hunter, NY at a young age.  Her parents owned a kosher boarding house in the Catskill Mountains, where she, her brother and two sisters helped manage and entertain guests.  One of these was a handsome boy named Abe Boyarsky, whom she first met when she was 8 years old and whose grandparents lived on a farm down the road.

Vivacious and fashionable at every age, Gloria graduated from Hunter-Tannersville High School in 1947 and joined her siblings in Hollywood, CA, where then Army Sergeant Abe Boyarsky sought, courted, and married her in 1952.   During their nearly 66 years of marriage, they lived in La Mirada, raising three children, taking adventurous family vacations in the national parks, and making deep and lasting community friendships.  Gloria’s creative children’s birthday parties were neighborhood extravaganzas!

Gloria attained her A.A. from Cerritos College and held many positions, including work as a travel agent and as the teacher’s instructional media specialist in the Norwalk-La Mirada Unified School District.  A passionate and dedicated volunteer, Gloria belonged to Women’s American ORT for 55 years, and was President of the Southern California Eastern Region, attending national board meetings and annual conferences.  She was actively involved with local groups, including the Arts Colony of La Mirada, the Friends of the La Mirada Library, The La Mirada Theater, and vice-president of education at Temple Beth Ohr.  Her involvement with the Democratic Club instilled in her children a dedication to social justice and love of country that inspired each of them in their life’s work.  Over a very full lifetime, she received many awards, citations, and commendations.

Clever, inventive, and artistic, Gloria studied Chinese painting and calligraphy, oil and pastel, mosaic, and fiber crafts, sewed everything from doll clothes to wedding dresses, and taught many of these skills to her daughters.  She was a Girl Scout and Cub Scout den mother, and spent many hours supporting Little League games.  She loved nature, was an avid gardener, reader, and swimmer; enjoyed skiing, tennis and table tennis, and loved to explore new places, filming with her 8mm camera and then editing the footage into home movies.  Gloria was an expert Scrabble player, and quickly completed every crossword puzzle that she began. She played the piano her entire life and loved music and song, which engaged her right up until her passing.

Gloria took great pride in her husband and children and celebrated each of their successes.   Throughout the years, she hosted delicious meals and celebrated holidays with extended family and friends, including more than 50 consecutive Thanksgivings (known as the Annual Chopped Liver Classic).  She is survived by her loving husband, Abe Boyarsky; daughters Karen Ruth Boyarsky and Lori Boyarsky Horwitz, son Jay Steven Boyarsky (Liana), and three grandchildren:  Jonathan, Natalie, and Abraham.  She is also survived by two sisters and several nieces and nephews.  The family wishes to thank Helga Torres, Gloria’s wonderful caregiver.

Memorial services will take place at Temple Beth Sholom, 2625 N. Tustin Avenue, Santa Ana, CA, on Sunday, December 17th at 11:00am.   In lieu of flowers, charitable contributions can be made in Gloria’s name to World ORT www.ort.org.

Share Your Memory of
Gloria
Upload Your Memory View All Memories
Be the first to upload a memory!
Share A Memory