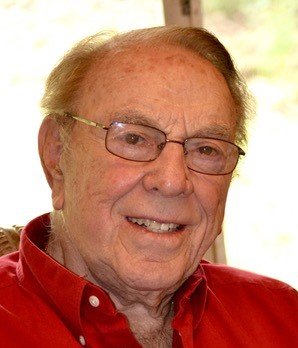 Please share a memory of Bernard "Bernie" to include in a keepsake book for family and friends.
View Tribute Book

Bernard "Bernie" Weitzman, 93, passed away on Sunday, September 17, 2017 in Sherman Oaks, CA. surrounded by his family. Bernie was born September, 29, 1923 to Sophie and Frank in Springfield, MA. , the youngest of 3 children. He is survived by his wife of 66 years, Barbara, daughter Casey and her wife Lynda, and two sons James and Douglas.

Drafted to the Army in August of 1944, Bernie served for two years in World War II.

Bernie received his BS degree in Civil Engineering from The University of Alabama in 1947, his JD from Southwestern University in 1962 and his Master of Arts in Cinema/Television from USC in 1967.

In 1949 he began his 60 plus year career in the entertainment industry at CBS as a page, followed by executive positions at Desilu, Universal Studios, MGM, and Lorimar Productions.

He was an active member of Rotary since 1988, the Motion Picture Academy and Pacific Pioneer Broadcasters.

Memorial Services will be held on Monday, September 25, 2017 at Stephen Wise Temple 15500 Stephen S Wise Dr, Los Angeles, CA 90077 at 4:15 pm in the Plotkin Chapel. In lieu of flowers, a memorial donation may be made to The American Lung Association.

Share Your Memory of
Bernard "Bernie"
Upload Your Memory View All Memories
Be the first to upload a memory!
Share A Memory